Communications for logistics companies: Part of speed is proper expectations 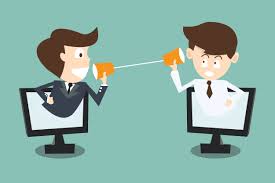 Communications for logistics companies: Part of speed is proper expectations

I’m not much a of a holiday person so in a way I am glad that we made it though the Christmas and New Year’s holidays and are back in the saddle at work. Nonetheless, I am quite guarded with my time whe I am at home and away from the office. I do have a private life and a social life as well. And though I am not unique in that aspect I am also not universal in my traits. Some people I know in our group and in my own office are constantly checking their mails on their phones and working from home on the weekends. Though I have my personal views on this I do recognize the difference in styles and personalities. Some people are worn out by the constant communication and others thrive on it.

The biggest part of work in the shipping industry if I put my finger on it would be communication. When we have applications this is one of the things we try to ask about when following up with references. We ask about reliability in communications which includes both clarity and speed. And generally speed is a requirement for companies working in the international logistics arena. But there are some reasonable limits to what should be expected.

When contacting your network members you should always be fast as your clients and agents need you to be but at the same time you will need to realize that holidays and weekends are not realistic times to expect quick responses from halfway around the world – especially if the communication is originated from your side. E-mails can be non-intrusive so it doesn’t really matter when you send them but don’t expect replies from other members when it is their weekends, holidays and after hours time. And if at all possible, non-emergency communication by phone, Skype, etc., should never take place during this time unless your partner has indicated that it is okay with them.

I have a few examples of this.

I used to be an owner of a freight forwarding company in Vietnam. Once I received a phone call from a company in Houston at 0230 hours in the morning. I groggily informed them of the time. “Oh?”, said the woman on the other end of the phone, “Sorry! I didn’t realize what time it was there when I dialed. But since you are up and I already have you on the phone…”

I couldn’t believe the gall of that woman yet two weeks later someone from the same company did the exact same thing at around 0400 hours. Needless to say, I started looking for someone else to work with in Houston.

We also have more recent case of a member who complained of another member who wasn’t following up with them fast enough. The complainer was in East Asia and the party they complained about was in the Middle East. They cc’d us on mails where they had written their first e-mail and sent four reminders to the company they were blaming for the communication breakdown. All of the said e-mails occurred on the same day and all were sent before the office was even opened in the Middle East! I thought this was unreal to say the least.

*And by the way, one of the most common complaints we receive from network members is a lack of communication follow up from other members. Every time I get this complaint my first question is “Have you picked up the phone and called them?” Almost always the answer is ‘no’. Quite often we’ll get the response that they should follow up on e-mail anyway. Yes, that’s true and we do want to know about communication problems with other members. However, are you in the business of being correct or are you in the business of shipping your clients’ cargo? Priorities should dictate that you call them before complaining that you haven’t heard from them. Complaining about it to a third party doesn’t get the shipment moved.

Getting back on point, it is not always wrong to communicate with agents at will. If these are your standards from the outset then you should let the guys on the other end of your shipments know this. If this is a requirement from your client, again, you should let your partner know. You should not, however, assume that you own their personal time.

Not discussing communications with your partners could be in and of itself your first miscommunication.

Gary Dale Cearley is the Managing Director of Advanced International Networks Ltd. (AIN), one of the fastest growing and most dynamic business-to-business networking organizations in the world. AIN’s networks include AerOceaNetwork (AON), XLProjects Network (XLP), and AiO Logistics Netowork (AiO). Gary Dale has been in many facets of international freight forwarding for more than two decades from operations to sales to the owner of the first 100% foreign owned freight forwarding company licensed in Vietnam. The companies that he has been involved with have been both generalists and specialists. He has also worked from large European and Asian multinationals (Danzas and Hankyu Express) as well has small start up forwarders. For the past ten years Gary Dale has owned and operated AIN. He has lived in several major cities in four different countries and he is multilingual. Currently Gary Dale runs the AIN operation from Bangkok, Thailand, but travels the world over.